Once Marie Claire had approached us to feature in an edition of their magazine we sat down as a family and debated whether to get involved or not. The brief they provided us with was that they were doing a segment on gay surrogacy. It was a hot topic again because Elton John and David Furnish had just had their baby using an American surrogate. To this day incidentally, we’re at a loss as to what happened to our invitation to their baby shower. Surely it must have got lost in the post or something? Elton if you’re reading this, no hard feelings. Anyway, Marie Claire assured us that the feature they were doing was a pro-surrogacy piece and that we would have full approval over the finished article.

We decided to do it. We’d debated long and hard but eventually decided enough time had passed that it was no longer sensational, or of interest to the tabloids. We also reflected back on the amount of good and positivity that the story had actually generated last time. A year on we were still getting messages from people, some of whom had gone on to be parents themselves, all as a direct result of seeing us have Wil. There’s something amazing about that. Something that fills me with pride and also generates hopes that society is changing and, that somehow, in a small way, we have been part of that. So, with that in mind we felt that our family being in such a glossy, mainstream magazine would help bring it to the attention of a different stream of people and also go some way to normalising it. After all being thought of as a normal family, as well as showing people that it could be done, was our ultimate goal.

Now I started to let myself get excited. We turned down a fee, asking only for travel expenses as we didn’t want to be out of pocket. Once we had decided to go ahead with the feature, Marie Claire wanted us there as soon as possible. Initially they wanted to come to our house. And we were tempted, we love where we live but we have 6 dogs and busy lives – we take shabby chic to a whole new level!  I just couldn’t face the idea of having to clean and tidy and make sure that everywhere was perfect. These photos were going to be in dentists’ waiting rooms across the country for god-sake. It had to be perfect.

We opted for plan two. Meet them at a shoot location in Southwark, London. How posh does that sound?

The one thing dampening our excitement was that Lorna was unable to make the date or time that Marie Claire wanted. They wanted to talk to her too but Lorna decided that if she couldn’t be there in person then she would rather just let it be about us. We were gutted that she couldn’t join us but she told us to go ahead anyway.

We took a trip to the shops and bought new outfits for us and Wil. I posted a picture the other day of Louis in the same shirt that Wil wore to the Marie Claire shoot. We had no idea at that time that our family would grow so much only a few years later.

The day arrived and excitedly we got on the train to London. When we arrived in London we were met by a car and driver. I can’t deny, I was like an excited schoolboy at his first disco. I had never been met by a car and a driver before! I decided straight away that I could get used to this. The car whizzed us from Waterloo station to the apartment that was going to be our home for the day. It was amazing. I could easily have had it as a weekend apartment, if I lived that sort of life. It was a loft/warehouse style building, with large, open-plan rooms beautifully furnished and it had a really homely feel to it. Up a set of ladders was also a magnificent roof terrace with the most stunning views across the city.

We were met there by the team from Marie Claire, led by the reporter doing our story, Andrea Thompson. Andrea introduced us to the photographer, stylist and others (who seemed to be there just to make tea, but who I am sure were an integral part to the day).  At first it all felt very unnatural, Andrea kept her distance whilst we all had our make-up and hair done. The photographer then followed us around the apartment and we were asked to play with Wil as though it was our home. They had provided some beautiful toys and props to use. We talked and played and laughed and tried to make it all look as natural as possible. Wil was amazing. He loved the fuss and attention he was getting from everyone. He was such a natural. Me on the other hand. I’m clearly a ‘proper’ man because I certainly can’t multi-task – you try smiling AND holding your belly in at the same time, I definitely failed at it!

The photographer was brilliant and literally took thousands of shots. When she was done with us it was time to be interviewed. We did this separately, one talked whilst the other entertained Wil. Andrea Thompson was clearly very good at her job. She was a senior reporter from Marie Claire and, when I googled her, I found that she had interviewed the prime minister a few weeks before. We were in good hands. Andrea had a great ability to make you feel relaxed enough to tell everything.

When the day had finished, and with us slightly on a media high, our driver conveyed us back to Waterloo station. As I stepped out of the car, onto the red carpet, Gerard took my hand. Oh shit! Mind wandering again. I think the media was going to my head. But actually, better than that, in a rare display of public affection, the real love of my life (sorry Gerard), Ivan, took my hand and together, with Wil, we departed London as a family united. The interview had clearly reminded Ivan what an amazing family we have.

We were more than happy with the final draft of the article.  And about 6 weeks later we received our copy in the post. There it was, we were in a glossy magazine! It was really fabulous. So well written and the pictures were just beautiful, despite my inability to hold my gut in.  Andrea had sent us a signed copy of the magazine, which takes pride of place in Wil’s memory box.

We definitely had no regrets about doing the article. It was done at the right time, for the right reasons. We felt also that by having no fee, we weren’t selling out. Hopefully it has changed at least one person’s mind about gays being dads, or shown them that they too could have a family if they want one. And if that’s the case, it was absolutely worth doing. 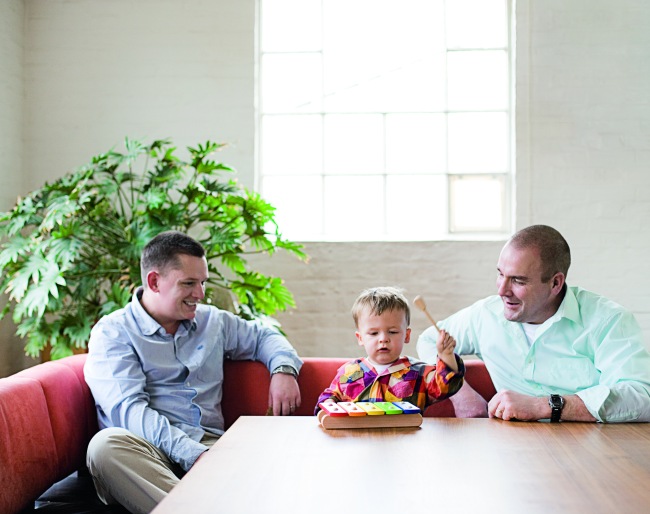 And, in the spirit of complete honesty, I adored the fuss and attention that day. Such a stark contrast to the media experience we had been subjected to before. Maybe I could be in the spotlight after all…….